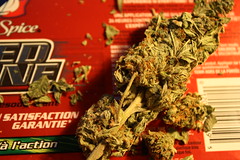 Just about any case can be settled, if not won. Guilty or innocent, if a defendant has the right lawyer, chances are much better for a good outcome. The legal system can be very complex and a great many different factors go into determining the outcome of any legal proceeding.  The best course of action is always to find the best representation as soon as possible.

A woman in East Texas was arrested by police after she called them to complain about the substandard marijuana she had recently purchased.

The 37-year-old woman was arrested in her home, according to Lufkin, Texas police. They went to her home to hear her complaint. According to her, the dealer would not return her money after she complained that the quality of the drug she had purchased was lacking. When the officer asked if she still had it, she pulled a small amount of marijuana from her bra. Subsequently, she was arrested for possession of drug paraphernalia.

Her complaint was she spent $40 on what she called “seeds and residue”. After trying to get a refund from the dealer’s family, she called the police.

If you have been arrested by the police or charged with anything, from a misdemeanor to felony, we can help you at Hofland & Tomsheck. Our legal team has everything you need to see your case handled both discreetly and fairly. Call us today for a free consultation.