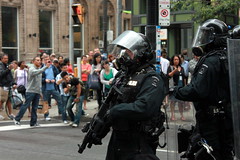 There are certain situations which can just spiral out of control. At times like these, the police are forced to intervene and arrests are often made. Unfortunately, people who are innocent are often caught up in these situations and arrested along with those that are actually guilty. Barring the fortunate appearance of an exonerating video, it can be really difficult for someone arrested in those circumstances to prove his or her innocence. This is wear a good attorney can make all the difference.

According to police, approximately 100 people were arrested and more than 40 people were taken to the hospital when a college party in Santa Barbara, California turned into a street brawl around 9:30 p.m. on a Saturday. The incident occurred during the spring break party that has come to be known as Deltopia.

A local newspaper states the violence began with a Santa Barbara police officer being hit in the head with a backpack filled with bottles of alcohol. After that, some of the 15,000 partiers began to throw heavy objects including rocks and bricks at the police, along with bottles. Fires were started, damaging property and law enforcement vehicles.

Sheriff’s deputies said there were at least five more injuries among their officers and they were forced to deploy tear gas. The violence had been ended by Sunday morning.

If you or a loved one find yourself on the wrong side of law enforcement, call the offices of Hofland & Tomsheck. Our skilled attorneys will handle your case with discretion and fight hard to ensure the outcome of your case reaches its best possible resolution.