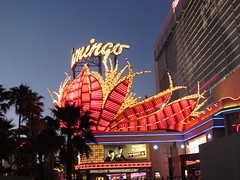 We have all seen people doing it and many of us have done it ourselves.  Crossing outside of a crosswalk is not the smartest idea.

Recently, on the strip in Las Vegas a 57-year-old man was hit by a 2005 Lexus while he was crossing outside of a sidewalk just south of Flamingo Road.

The pedestrian was seriously injured a result of the accident.  He was taken to University Medical Center for treatment of life-threatening critical injuries.  The accident is still under investigation.

In an accident such as this, it is often assumed the pedestrian was at fault because he was crossing outside of the marked crosswalk.  However, that is not always the case.

Accidents usually happen because someone was careless.  If there is an instance where two or more people are in an accident and more than one person was careless, the person who was the least careful is responsible for paying at least some of the damages suffered by the people that were more careful.  Most legal liability is determined in this manner.

In Nevada, modified comparative fault determines how a claim is handled when both parties may have fault for the accident.

This type of modified fault asks for a percentage of blame to be assigned to the individuals involved in an accident.  It then deducts the percentage of blame from the total loss suffered to compensate those that were injured.  For example, if the man in the crosswalk was struck because the vehicle was travelling at speeds in excess of the posted limit, 40% fault may be assigned to the pedestrian and 60% may be assigned to the driver.  In Nevada’s modified system, the plaintiff must usually be found less than 51% at fault.  In the example, the plaintiff would meet that burden, therefore be able to recover damages, less his 40% fault.

Experienced attorneys in modified fault litigation can help you determine if you may have a claim even if you were are partially at fault.  It is definitely worth looking into.

If you were injured in an accident, and feel someone else is to blame, at least partially, call us for a free evaluation of your claim.  Hofland & Tomsheck has experienced litigators in complex cases and have successfully helped many plaintiffs sort through modified fault litigation.  Call us today.