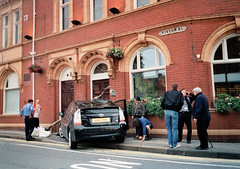 Injuries and deaths caused by impaired drivers are happening at alarming rates.  Nevada is cracking down on these drivers by sentencing first time offenders from two to 20 years in prison if someone is injured as a result of their driving under the influence. If more than one person is injured, the sentence can be consecutive for each person injured.

In April 2013, 19-year-old Gage Lindsey was driving his 1993 Lexus LS400 allegedly under the influence of several different drugs.  Lindsey said he blacked out before driving his car into the crowded Egg and I restaurant on Sahara Avenue injuring ten people.  Some injuries were severe and required immediate medical attention.  Luckily, there were no fatalities as a result of Lindsey’s reckless behavior.

Lindsey is expected to plead guilty to two charges of drunk driving and causing substantial bodily injury.  His hearing will be held soon.  The 19-year-old faces two to 40 years in prison for the accident and injuries.

Cases that involve a drunk driver are not ordinary cases.  They have unique differences that can aid a plaintiff in receiving a higher award.  Nevada makes it possible to get a case exempted from arbitration on public policy grounds in the case of driving under the influence.  Alcohol tests that determine the alcohol level in an impaired driver can be used in filing for this exemption.  If granted, it becomes possible to take the case to trial which often yields a higher award for the injured parties.  An experienced lawyer understands how best to get these exemptions so that you have a greater chance of maximizing recovery of your losses due to the accident caused by the drunk driver.

When injured in an accident, your world can be turned upside down.  Unexpected medical bills, lost wages and even the inability to do the things you did prior to the accident are all things that deserve compensation.  If you are injured in an accident that was not your fault it is important to understand what to do and what not to do to maximize the recovery for your losses.