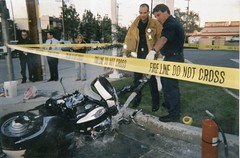 When out on the road, it is very important that each driver look out for others. Just simple consideration alone prevents so many accidents. However, when people do irresponsible things like get behind the wheel after drinking, disregard  stops signs or red lights, or fail to lookout for bicycles, pedestrians, and motorcycles, tragedy is often the result.

A 20-year-old motorcyclist suffered serious injuries after being struck by a vehicle at around 11 at night. The driver who hit the motorcycle is suspected of drunk driving.

The motorcyclist was turning his bike from the private driveway of an athletic club when he was hit by a car going well over the speed limit, driven by a 29-year-old male. The driver of the car lost control and left the road after hitting the motorcycle. Both he and his passenger got out of the car and fled the scene of the accident.

Responders took the motorcyclist to University Medical Trauma Center, where he was listed in serious condition.

Los Vegas police quickly located the driver of the car and arrested him for driving under the influence and for leaving the scene of an accident. He was then held at the Clark County Detention Center.

If you have suffered a personal injury in the Los Vegas area and you need representation to get the legal compensation you need to help your recovery, we can help you at Hofland & Tomsheck. Contact us as soon as possible for a free consultation so we can help plan your strategy and work toward putting your accident behind you.