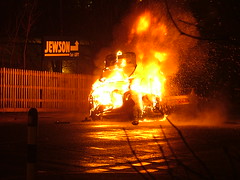 It can sometimes be difficult to determine just who is at fault when a serious accident occurs. Sometimes, no one is really at fault. The fact remains, however, that someone was injured and those injuries will require time away from work and money to heal. The injured party may not be able to adequately pay without financially crippling him or herself or the family. Legal compensation is a necessity.

According to authorities in Lake Havasu, Arizona, a chemical reaction occurred between fireworks and some mixing compounds being transported in a car. The combination caused an explosion which killed a 59-year-old man from Menlo Park, California.

The deceased man had been in Lake Havasu City to attend a Western Pyrotechnics Association event.

If you or a loved one has been injured, you deserve proper compensation for what you’ve suffered. Call Hofland & Tomsheck for a free consultation. We’ll see what we can do to make sure you are given the help you need to get through a difficult time in your life.