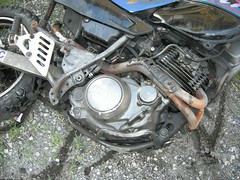 Even the best driver is not immune to the recklessness of other less thoughtful drivers. Accidents have a great cost, even ones considered “minor”, in both time and money. When an injury occurs, these costs go up a great deal, along with an added amount of emotional stress. At times like these, compensation is necessary to help the injured party get back to his or her life as soon as possible.

According to Metro police, a motorcycle rider and his passenger were both seriously injured in the course of a hit-and-run accident on Wynn Road near Spring Mountain Road.

Police evidence and recollections from witnesses piece together the story. Early that morning, the driver of a 1997 Lincoln Continental left the scene of the early morning accident at Spring Mountain and Wynn Road. The Lincoln was traveling above the speed limit when it struck the rear of a 2008 Suzuki motorcycle. The 25-year-old male driver and his passenger, a 24-year-old woman were thrown from their vehicle and into the street.

The driver of the Lincoln attempted to get away by car, but he veered off the road and crashed into a wall, at which point the driver attempted to escape on foot. The 27-year-old male driver turned himself into Metro police several hours later and was charged with felony hit-and-run.

The victims of the accident have been taken to University Medical Center Trauma.

If or a loved one have suffered due to the reckless actions or negligence of another, you have a friend at the law offices of Hofland & Tomsheck. We are a law firm experienced in all manner of personal injury cases. Call us for a free consultation and we will do everything possible to make sure your case arrives at its best possible resolution.