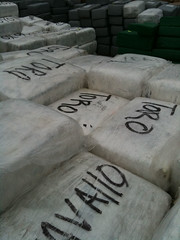 A fair trial is the very essence of the justice system in America. The accusation and the identity of the accused are both irrelevant – everyone deserves justice. No one should be punished for a crime they did not commit, and those that did commit a crime should not be punished disproportionately for that crime. A good attorney is important when it comes to a fair trial – there can only be justice when every side of the story is heard.

Police determined the driver had, in fact, never held a driver’s license. The pair in the car consented to a search and police found three garbage bags containing marijuana in the trunk. After this, the two men were arrested without incident.

The bags found in the trunk held 39 bundles of marijuana weighing over 40 pounds in total. They had an approximate value of $205,000 in total.

Working together, Border Patrol and Mohave County authorities determined the two men were, in fact, in the country illegally. They were taken to be held at the Mohave County Jail. When arrested, the pair was traveling from Modesto, California to Dallas, Texas.

You deserve someone who will fight for justice and for your cause, no matter what the accusation. Call Hofland & Tomsheck today for a free consultation. We have skilled attorneys who will advocate strongly for you and for your rights under the law.