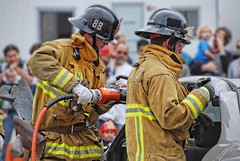 Safety is not just a personal matter. In a way, we each bear responsibility for the others around us. In a car, we follow the laws so we don’t injure other drivers or ourselves. Employers have to make sure their work environments are as safe as possible for everyone involved. Restaurants need to make sure everything is properly prepared and safe to eat. Because we all share in this responsibility, those who fail to hold up their end are also liable. They have a debt to pay, so the victim does not have to face crippling medical costs and other expenses.

An explosion and fire at a Southern California metal polishing business injured 11 people, according to authorities. Two of these were critically injured.

According to a Los Angeles County fire inspector, the explosion occurred just before 10 in the morning, originating from overhead ducts. He believes lint or dust building up in the ducts may have been the cause.

It took around 40 minutes for firefighters to gain control of the fire.

The fire inspector reported that the two who were critically injured suffered burns while the others were hurt due to smoke inhalation.

The business is in an industrial area of Los Angeles. It makes and polishes car wheels, according to the fire inspector.

If you’ve been injured on the job, or anywhere else, due to someone else’s negligence, you can find help at the offices of Hofland & Tomsheck. Call us today for a free consultation. Let us assist you in claiming the compensation you need.