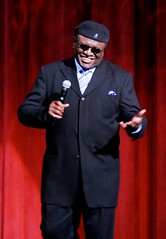 One important aspect of accidents is that they can happen to anyone at any time. There are no accidents that only happen to a certain group of people. Anyone can be injured in a car accident or on the job, even at workplaces that are not hazardous in the slightest. Sometimes, these accidents are due to someone else not observing the rules that keep us safe or failing to practice good common sense. These kinds of accidents must be legally pursued so they can never happen to anyone else and so the injured person can get the help he or she will need for a full recovery.

A Las Vegas jury has recently heard closing arguments on a personal injury lawsuit against a Strip resort. when omedian George Wallace was performing there and injured his leg during a performance in December 2007.

The testimony phase of the trial went on for two weeks during which the jurors heard how the 61-year-old standup comic was entangled by wires while entertaining a corporate group at the resort. According to his statement, it felt like a bear trap, or like electrocution.

The comedian’s attorneys are asking for $9 million to compensate him for his injuries and the income lost during his period of recovery, claiming the accident was the result of negligence by the resort.

Attorneys for the resort claim the comedian assumed the risk of injury during the show, already had an injury before he took the stage, and was not careful himself during his performance.

You don’t have to be an entertainer on the Strip to get good legal representation for your personal injury troubles. Call the offices of Hofland & Tomsheck and we’ll see what we can do to make sure you are compensated quickly and fairly.